I’m a tennis professional who makes a living teaching tennis. I consider myself the luckiest person on earth. I appreciate you visiting the site, and hope you enjoy!

Taking the Ball Early: The “Go To” Mindset Taking the ball on the rise in tennis is a mindset that takes focus and determination. Moving to the ball is demanding on the body and takes much more effort than waiting for the ball. That is why so many recreational players tend to wait for the ball, […]

Tennis Return of Serve: Importance The tennis return of serve is the second most important shot in tennis behind the serve. The first shot you hit in half the games you play will be the return of serve. Most players would be satisfied neutralizing their opponents serve with their return. Others have developed their return […]

Tennis Overhead Smash The tennis overhead smash is one of the most explosive strokes in the game. At the professional level the overhead typically results in either a winner or their opponent barely getting a racquet on the ball. Pete Sampras put his flare on the overhead smash in the 90s by leaping into the […]

Tennis Serve Technique & Fundamentals The tennis serve technique is the most important stroke in the game because in order to start a point you need to hit the serve successfully in the court. Just like a pitcher in baseball can pitch no hitters, the server in tennis can also dictate play and win points with the serve […]

Tennis Approach Shot: Introduction The tennis approach shot is utilized to transition from the baseline up to net. Generally a player approaches to the net on a ball that lands around the service line or shorter, or if they recognize that their opponent is out of position and is likely to provide a weak ball as […]

Tennis Backhand Slice The tennis backhand slice can be effectively utilized in numerous scenarios however the stroke is often underutilized. Tennis players utilize the slice to buy themselves more time to recover back to the center of the court, keep the ball low for their opponent, and as a change of pace during a rally. […] 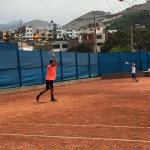 Tennis Two-Handed Backhand The two-handed backhand groundstroke is one of my favorite shots in tennis although I find it takes more energy to hit. Due to having both hands on the racquet your footwork needs to be on point, otherwise it can feel overwhelming. Check out the prior post titled Tennis Backhand Groundstroke Ultimate Guide to catch […]

Tennis Backhand Groundstroke: Options There are a few different types of tennis backhand groundstrokes which you can use to hit the ball effectively. The one-handed backhand, the two-handed backhand, and the slice backhand. All the backhand options have their strengths and weaknesses, however when implemented in certain strategic situations the selection can make a profound impact. […]